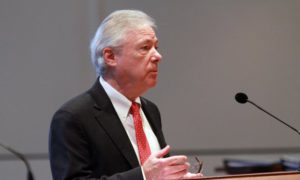 Director of the Georgia Judicial Qualifications Commission, Ben Easterlin, has announced his intention to retire. The Commission is the State agency charged with the responsibility and power to investigate and prosecute complaints of ethical misconduct by Judges. The Commission began operating in July 2017 following a 2016 Constitutional amendment abolishing and re-constituting the Commission.
Easterlin, a former President of the State Bar of Georgia and a former Chair of the Commission, retired from King and Spalding in 2016 and was hired in 2017 to assist in the formation of the new Commission. Easterlin expressed satisfaction that the Commission possesses the infrastructure, policies, procedures, and personnel to do its job at a high level, and he further stated that “it has been a privilege to work with the dedicated and selfless public servants that give generously of their time and talent as members of the Commission. I am proud to have played a role in re-generating the Judicial Qualifications Commission so that it possesses a solid foundation to perform its important role in the judicial system.” Easterlin will continue as Director until a successor is named in his place.